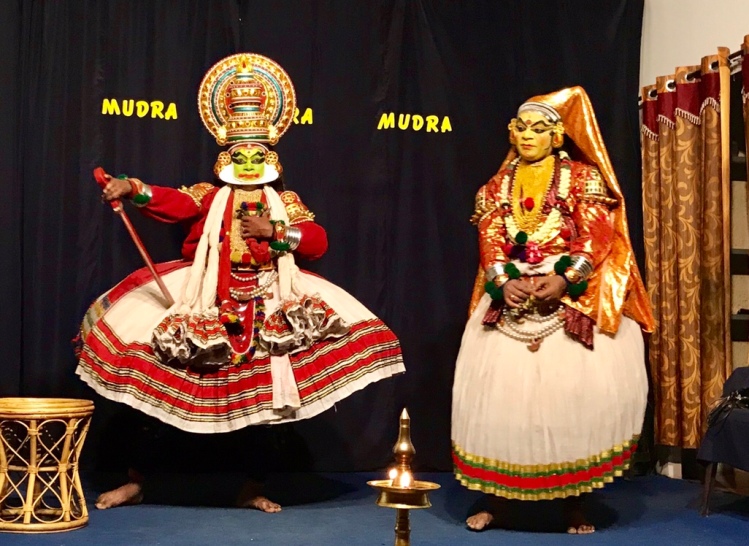 Although I had originally planned to see the Kathakali performance in Kumarakom, I find out that it’s difficult to organise, or at least my hotel says so. Fortunately I have the evening free in Thekkady, so I decide that I might as well.

I glance in my guide book, and it recommends the Mudra Cultural Centre. I type in the URL and check – the show timings are still 5pm and 7:15 for Kathakali, and 6pm and 7:15 for kalarippayat, the traditional Kerala martial art. I call them and reserve tickets for the early shows for both performances. At about 4:10 I plug “Mudra Cultural Centre” into google and start following the directions. Everywhere I go in Thekkady ends up in the vicinity of the infamous Bus Stand for the Periyar park.

I stop to ask some people standing about the Mudra Cultural Centre. A third man appears from nowhere and starts telling me something unintelligible about boating. I try to walk away, but he persists.

I turn and tell him I am going for Kathakali not for boating. He starts motioning me to come back and discuss my plans with him when I snap that I’ve already bought tickets. He asks where and I tell him Mudra, and turn  and walk away.

“I’ve already spoken to the guy I don’t need help,” I call back.

Perhaps I’m hasty, but the Delhi girl in me is suspicious of over helpful strangers and their agenda. It could be the guy was just trying to help.

And so it comes to pass. I arrive at Old Mudra, having booked tickets at New Mudra. The guy shows me that although the names are the same, “New Mudra” uses a slightly ornate font, that outside the theatre is more like Comic Sans MS.

Attention to detail is everything people.

(Also somebody remind me to write to Lonely Planet).

Incidentally the information given in the guide book all refers to New Mudra, while Old Mudra gleefully plasters “recommended by lonely planet and tripadvisor” on its  brochure.

I take a breath and wonder if I’ve made a mistake.

I enter the auditorium, a no-frills large room filled with red plastic chairs, seat numbers marked on the back by paintbrush. The curtains are orange with black paisley on them, translucent and revealing bars on the window outside.

A concrete stage stands in front. On it, a man sits cross-legged, lunghi resting on his calves, face already adorned with paper semicircles above his jaw line, and shades of black and yellow. Right now he is painting his lips orange.

A few people wander around him, one of them another performer, and the other two musicians. A pile of woven sacks sits on a stool at the back. I wonder what it is for.

The audience is largely empty except for me and one couple, though eventually people start to trickle in. Suddenly I look back and his lips have gone pink, and he is touching up the green on his face. He stands finally, makeup ritual completed, and the musician who also doubles as the MC, rolls up the mat.

I get distracted, and suddenly look back to find him fastening a blue salwar all the way up across his chest bone (for those of you familiar with the show Family Matters, think Steve Urkel). He fastens anklets, and bells around his knees. He does an elaborate exercise with a black fabric of some length, rolling up the woven sacks to help create body beneath his skirts.

Meanwhile, they are wrapping cloth around the sacks. Finally he puts on green shirt and red one over it. I am trying to pay attention but the couple next to me is chattering away, blissfully unaware of my ADD problem.

Finally the MC begins to speak. Kathakali is a dance performed in heaven, whether metaphorical or not, he does not say. The makeup is created by mixing dyes that you find in nature and through natural sources, as is the glue that fastens the paper to the performers face.

By this point, there are about 22 people or so in the audience. The word Katha means story, and Kali means dance, so the word directly translated means “story-dance.”

He explains the names of the instruments. I can’t hear them, but they are majorly percussive. The sharpness of the miniature cymbal-type affair, overlays the drum beat, and the whole thing is enhanced by the singing of one of the performers.

The story is told by the singer, but none of the characters sing. They use a combination of mudras, actions, facial and eye movements to communicate story.

Eyes exercise are important. The performer onstage, a different one from the one who was doing his makeup earlier, demonstrates by moving his eyes round and round, side to side, and up and down, all while keeping the beat of the percussion band.

It’s not just eye fluidity, you need strong cheek and facial muscles – and he demonstrates the various types of movements much to our amusement, going impressively quickly.

He demonstrates reactions of love and hate, anger, sadness, shyness. What’s amazing is that it makes so much more sense. These expressions are so exaggerated they’re entertaining!

To be honest, until this moment, the kathakali is a bit of an obligatory tourist thing for me, I don’t expect to actually enjoy it as much as I did. But having 45 minutes of demonstration and interactivity (he called a few volunteers up) makes all the difference. The performer, especially the one doing the demonstration, was animated, and interacted well with his audience. He really showed us how the various types of expression can mean different things. For the first time, I learned to truly see dance as a language.

The story they presented was Narakasuravadham [murder of Narakasuara]. Basically Nakrathundi, the maidservant (? What does she do? Clean the house? Dust his fans? I need to brush up on my Hindu mythology!) of demon king Narakasura, goes to heaven to kidnap a few beautiful ladies for her boss’s enjoyment. There she find Jayantha, son of lord Indra.

She is filled with desire for him because he is, well obviously very handsome and all, so she transforms herself into Lalitha, a beautiful woman, in order to ensnare him.

I have to wonder what Nakrathundi’s long term plan is here, it sounds like an already terrible romantic comedy gone wrong.

Lalitha/Nakrathundi makes her move, and Jayantha asks Her to reveal her identity. She responds that she is a heavenly beauty and tries to seduce him, but Jayantha is a good boy and will only get married with his fathers permission. Lalitha/Nakrathundi responds by continuing to try to embrace him with, as the program describes “her lustful desires.”

At this point I have to stop and say, I feel like many women I know at least, present company included, would identify *much more* with Jayantha than with Lalitha/Nakrathundi at this point.

Anyhow, like anyone would, Jayantha gets fed up, and orders her to leave, which of course she doesn’t. Instead she reveals her true form, tells him she has come to kidnap him, which has never really worked out well for any situation of unrequited love, but alas she goes ahead with it. She tries to catch him, and he (really pissed right now), cuts off her ear, nose and breasts. She screams in pain and returns to Narakasura, while Jayantha relates the incident to his father.

Just FYI, I got all this from the pamphlet, it’s not like I’m such an expert at Kathakali that I got all this while watching my first performance! But following along, once you understood the types of gestures they made, the whole thing made much more sense.

I still don’t know if Old Mudra or New Mudra is better. But I left the performance really glad that I had made the effort.